To much shit goin on so here’s a recap of my greywater system.

How important is Mulch?

My plan for tomorrow is to go pickup a load of mulch from the UNCE orchard, am I going to do it? I hope so. It has been a hectic week at work and I keep finding myself slipping into rationalizing sitting on my ass all day reading instead of spreading mulch in the 100 degree sunny day predicted for tomorrow.

The reality is that it needs to be done. Mulch is a key component of all of the individual projects that collectively make up whatever it is that I’m trying to create.

The Backyard Orchard Culture philosophy that I am trying to follow not only stress’s mulch’s importance but the 17 year history of the UNCE expiremental Orchard has proven that it is vital for an orchards success in my area.

I have seen with my own eyes that my greywater irrigation system does not work properly without mulch, transpiration and evaporation prevent the flow of moisture between my dripperlines and that isn’t even considering the perceived need to sub-surface irrigate with greywater to isolate potential pathogens.

Finally my chickens are pushing the limit of capacity in my neighborhood so I need to keep them as unobtrusive as possible and I have found that a deep litter system, really just mulching your chicken coop, really cuts down on the flies and all but eliminates any odor issues.

So am I gonna get my butt up and go visit John at the orchard, BS about guns, find out what type of Iron Chelate I need to get to treat the chlorosis I got happening , and load up the truck with mulch? Yup I probably will…..I’ll let you know tomorrow.

My eye Your eye

We had a Professional Photographer show up at our door a couple of months ago who offered her services in return for room & board.

She set out to document a day at the Fruity Chicken Orchard. This was in mid February and we were putting our last couple of trees in the ground. 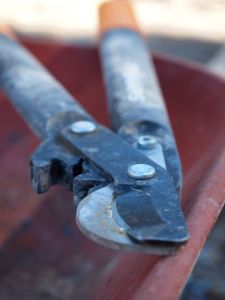 I have always appreciated good tools but never viewed them as part of an interesting composition, although I’m sure the Kool Krew were convinced they were the main focus.

Who would have guessed that something as routine as staking and painting tree trunks could look so interesting.

Usually it’s just me working on my little project, a camera shows up and my nephew suddenly becomes helpful.

My Sister Lorri has a definite gift for finding the beauty in everything and capturing it on film.

As can be seen in these 2 pictures there is currently a lot of open space in my Orchard. This space both receives full sun and is irrigated.
That got me thinking about how I could put that area to use. At first I tried pulling the mulch back from the area above the  dripperlines. That didn’t work out to well because the mulch was so deep that it would migrate back into and cover the cleared area within a day. That was when I thought of raised beds, but in reverse. 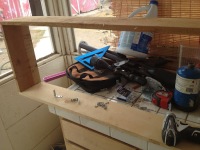 I built some 70″x14″ frames from cedar fence planks nailed together then reinforced in the corners with L-brackets.
I installed these in between the trees and on the upslope side of the drip lines. I chose to put them there so that the majority of the water would still move through the mulch bed while water pulled uphill through capillary action would irrigate the crops in the boxes. 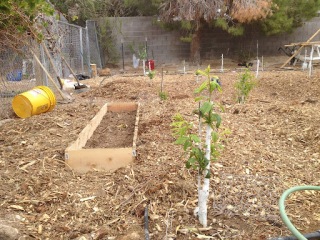 Above is the first bed set into the mulch, in the foreground my Emerald Beauty Plan can be seen leafing out nicely. Below are the first 4 boxes installed between 2 rows of Plums, Pluots, Apricots, and Apriums.

Sweet Corn, Cow Peas, Pinto Beans, and Buckwheat have been sown in these first beds. The Sweet Corn is for us and the rest is for chicken feed and to help break up and improve the soil texture. I am now thinking that the middle row will be setup similarly to the first row but will be sunflowers mixed in with legumes and cover crop while the final row, where there is room for six boxes, I may fill the boxes and use them as true raised beds. The draw back on that is that I will need to irrigate them, the upside is fresh Tomatoes!

Today I completed the basic installation of my Gray Water Irrigation system for my High Density Orchard. The system brings water from my surge tank (a rubbermaid garbage can) through a 400 micron filter (that only removes the really big stuff) and to the orchard via 3/4″ poly tubing.

In the above pictures the Surge tank and Filter is underneath the stairway in the first pic, the 3/4″ main line can be seen on the right hand side of all of the pics and it also runs along the fence line with the grapevines.

Once the Gray Water reaches the Orchard via the 3/4 poly line it is distributed throughout the planting area via 1/2″ dripper line. This dripper line has emitters spaced every 12″ along it’s length and I have spaced the lines every 4′ running generally with the contours of the area. What the heck does that mean? It means that the rows themselves are basically level but each row is lower down the slope of the land than the previous. Originally I thought my Orchard sloped from the NE corner down to the SW corner which would have forced me to orient the rows on the bias running NW-SE, but when I dug out the laser it showed that I had only a very slight E-W slope with the main slope being N-S. Consequently I ran my lines E-W, located 1′ N of each row of trees. 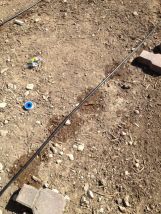 The first picture shows the layout of the emitter lines in relation to the trees, the following pics show the dispersal of the Gray Water from the emitters.
In a traditional drip irrigation system for a planting such as an orchard you would irrigate each individual tree with three or four emitters located in a circular pattern roughly at the drip-line of the tree. What’s the drip-line of the tree you say? It is the circle defined by where the rain would drip off of the leaves of the tree. This system is designed to water each individual tree, additionally common knowledge (which everyone knows ain’t necessarily correct) has it that this type of irrigation should be done slowly and infrequently to encourage deep root growth. This deep root growth is supposed to allow the tree to tap into buried sources of nutrients and provide a secure foundation.

Here we see the drip lines running down the rows of trees, which along this axis are spaced 9′ apart,  the expanding area of moisture can also be seen developing in the second pic.


The traditional system works great when you are providing water solely for the purpose of irrigation, in my Orchard my water source is primarily a waste product from laundering clothes. This Gray Water is not storable due to the fact that it contains nutrients that will start to get funky in 24 hours or less. Also for a Gray Water system to work in the long run it must be as unobtrusive as possible, if the system requires thought and effort every time a load of clothes is going to be washed it ain’t gonna work!
Capillary action is the main theory my Orchards irrigation system is based on. Basically I am watering the entire 600 square foot area of my Orchard instead of the 24 seperate 4′ diameter circles around each tree. When I first started researching this concept it made absolutely no sense but the more I read the more the pieces came together from separate sources to reinforce what Paul James over at graywatergardening.com is preaching. What I am trying to achieve is an inviting biodynamic area for my trees to send roots out into. The moist areas seen expanding out from the lines in the pictures above is the result of approximately 80 gallons of Gray Water flowing through the system, by next weekend I’m hoping that normal laundry use and capillary action will result in uniformly moist soil over the entire area.
Then comes the mulch! Everything I am trying to emulate in my Orchard says that mulch is the key! Dave Wilson over at www.davewilson.com says it’s key to successful Back Yard Orchard Culture, Bob Morris at xtremehorticulture says it’s key to growing fruit in Las Vegas, and finally Paul James at graywatergardening.com says it’s key to having a safe and efficient Gray Water system. So next week I plan on hauling in mulch (ground up tree trimmings) and covering all of the area watered by the drip lines to a depth of at least 6″. Over time this will provide a fertile and ever improving soil for my trees to spread their roots into as the mulch slowly breaks down and is incorporated down into the soil by the natural action of earthworms, God’s little roto-tillers.
Leave a comment
Drip Irrigation, Gray Water, Grey Water, orchard

I received the material for my gravity fed drip irrigation system this past week. The system I am using is from www.irrigray.com . Their site is a wealth of information. Before deciding on irrigrays drip approach I did a lot of research, http://oasisdesign.net/ , is a good starting point with a wealth of knowledge that isn’t built on fad theories.

My system is basically a gravity fed laundry to landscape system, the starting point of which is a surge tank. Don’t confuse this with a storage tank, gray water contains to many proteins and other nutrients and if held for more than a few hours will get funky. As you can see I am using a durable garbage can.

The kit came with a fitting to easily tap into the surge tank. I drilled a 3/4″ hole approximately 3″ above the bottom of the tank, inserted a tight fitting rubber grommet, and then inserted a fitting that was a force fit in the grommet thus creating a watertight seal. The other end is a standard barbed fitting for 3/4″ poly irrigation tubing. The valve you see is only for system service and maintenance, when the system is in operation this valve will always be open. 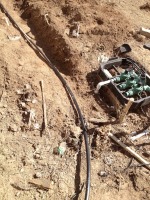 As you can see that 3/4″ poly line goes past my irrigation valves, along a ditch, then comes back up and is run above ground in my orchard area. 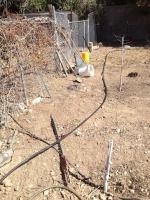 I still need to install a 400 micron filter somewhere in the line before it gets to the orchard area, then install the 1/2″ dripperline that has 2 gph droppers installed every 12″ along its length. I plan on doing all of that next week which should be right on schedule for the start of the irrigation season here in Vegas. I did see one of my trees beginning to put out the tiniest little leaves today.