Spring has sprung and my incubator is cranking, 20 of the first 24 I set hatched. I did lose one after the hatch, no clue about why, so there are 19 little fluffy butts eatin, drinkin, poopin, and growin in my new-found brooder.

What a mess of chicks

Lexi waiting for her new favorite chicken to hatch 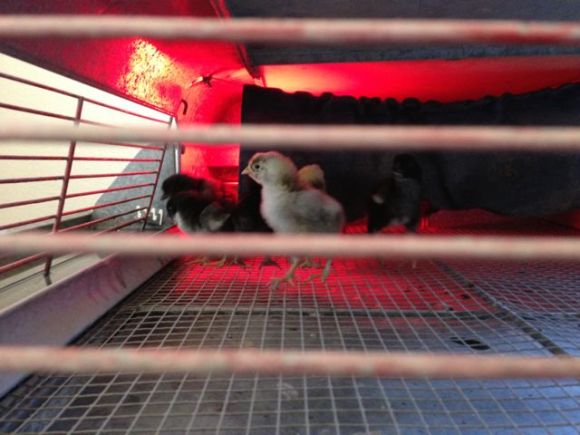 The new brooder is working out great!

So far my list of barnyard critters is limited to chickens and ducks, I have wanted to branch out into bees but my sweety Karen is adamant that ain’t gonna happen. It always gets pointed out how many chickens I have, in fact just last week I got asked “what in the world are you gonna do with all of those baby chickens?” See if you can spot the irony in the situation when you look at the following pictures taken at the time that silly question was being asked.

Gooey and her bottle

Karen says that Gooey is the foundation of her new venture into making goat cheese and goat soap. Gooey is now two weeks old, walks on a leash, lives in a kennel in the living room, drinks her milk from a 2 liter pepsi bottle with a nipple on it, runs to karen when she hears her voice, head butts the fridge to tell you it’s time for her bottle, and goes for car rides “just for fun”. Yeah goats are so much more practical than bees.

Gooey a week ago 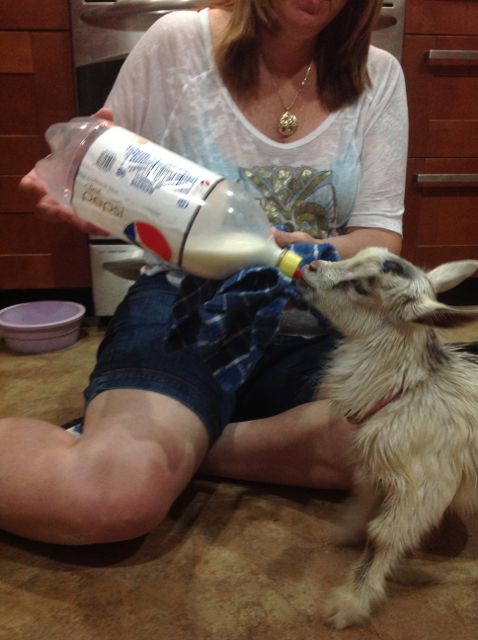 Isn’t it amazing how much Gooey has grown in just one week? She drinks about a third of that 2 liter bottle three times a day along with eating hay and weeds in the front yard. Lest you think “Tuey” just went off half cocked on this goat thing she did do a pretty good job of researching and choosing the proper breed of goat. Gooey is a Nigerian Dwarf Goat, she should only get about 20″ tall and weigh somewhere around 75 pounds when fully grown. From what I have read the “dwarf” part of their name is just a label that has been hung on them because they are small. They weren’t bred specifically for size but just turned out that way as a result of breeding for good milk production in a harsh environment. Nigerian Goats are one of the best goats for feed to milk conversion and have sweet milk that is very high in butter fat. Obviously Tuey weighed these factors and made a rational decision rather than falling in love with a “cute little goat” at a feed store in Escondido. Tuey would never track down a breeder of “cute little goats” and convince them that she was an expert at bottle feeding animals and could be trusted with a week old baby. Additionally Tuey would never pester a breeder of “cute little goats” so much that he made he regular phone calls to update her on the status of her becoming a “goat momma”. Yeeeeeaaaah Tuey would never do something like that…..would she? Of course she did! Thats what Tuey does, and in truth one of the things I love so much about her. So you would think with my indulgence of Karens fascination with Nigerian Goats and African Grey Parrots (last count was 10) a few little bees wouldn’t be such a big deal.