My next venture into Korean Natural Farming techniques is FPJ aka Fermented Plant Juice. 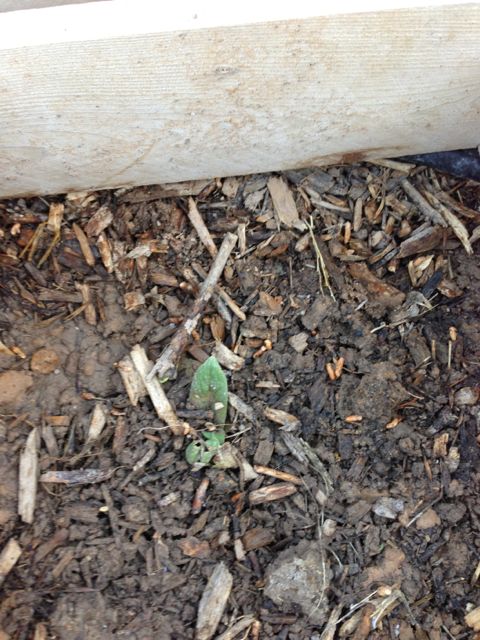 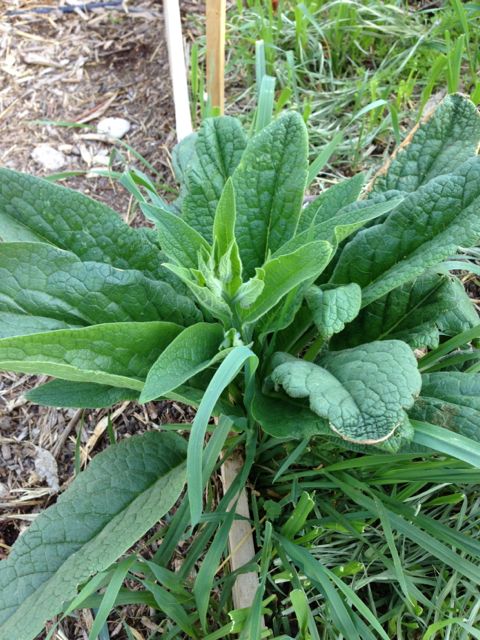 The Comfrey I got from Coe’s Comfrey last fall are really doing well this year. In fact I should have paid more attention to where I had planted it, apparently I missed some when transplanting them out before tilling the area for the first of my new 4’x12′ beds and now there are little comfrey plants coming up all over. Those little plants are going to be allowed to get a little bigger before they get potted up and either transplanted or given to one of the Master Gardeners at the UNCE orchard. 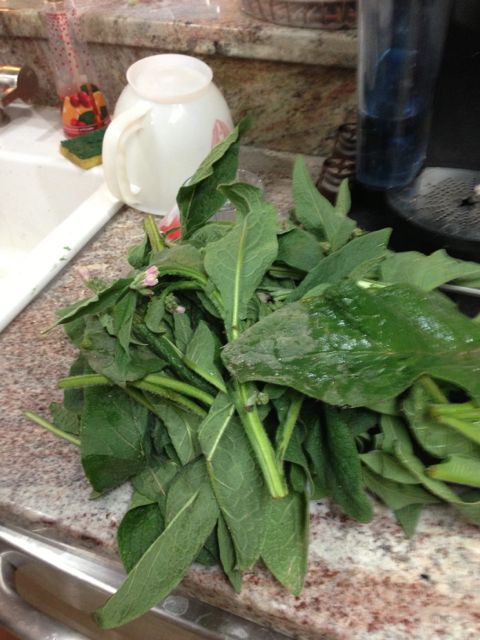 The first harvest of leaves resulted in a 1 gallon bucketful weighing a pound and a half. Four days later you can’t even tell anything was cut from the plants, this stuff grows like mad and thrives on high nitrogen sources like raw chicken manure and straight urine! 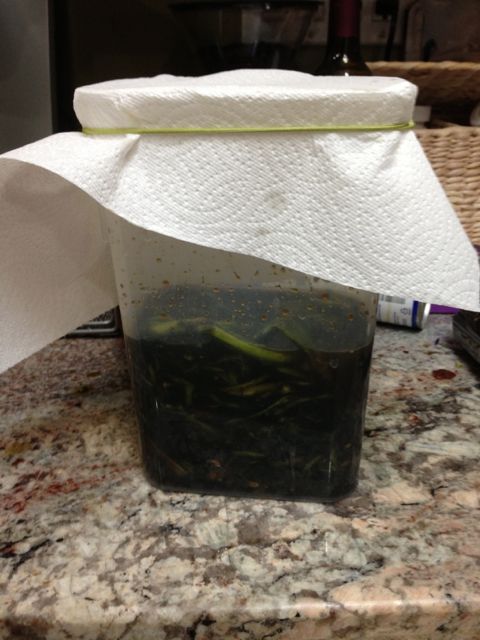 After mixing/macerating the comfrey at a rate of 2/1 with brown sugar the volume was greatly reduced. 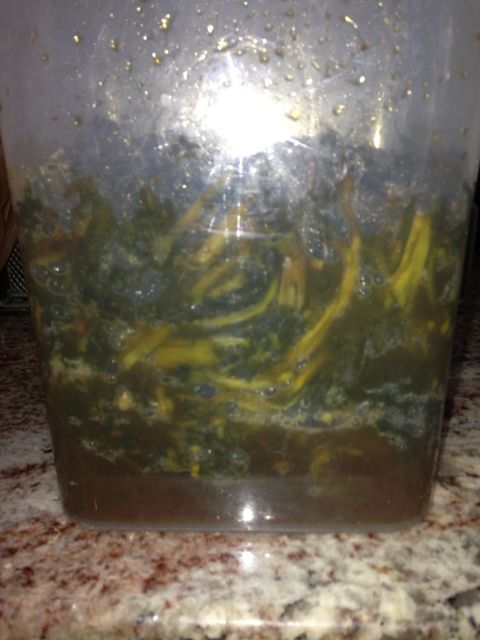 Four days later and the mix has started to funk up a bit but hasn’t gotten stinky….yet.

While not strictly according to the procedure laid out by Bryan McGrath in this excellent FPJ outline:  I added 3 cups of  dechlorinated water because it seemed like the right thing to do. At this point my Comfrey concoction smells sorta like canned spinach.

Then it was back into my newest hidey-hole to ferment until next weekend. If my brew starts developing the dreaded hydrogen-sulfide rotten egg smell it’s going to have to move up to the orchard to escape detection by my sweety Karen.

There is Funk in the Orchard

A few weeks ago i made a post, There is Fungus Among Us, in which I outlined my entry into the world of Korean Natural Farming. About a week later my post, IMO aka Indigenous Micro Organisms, outlined the second step in creating microbial rich preparations for application. Today’s post is about the final step of stabilizing the two microbial cultures, Lacto-Baccilus & IMO, that I initially collected/captured then refined.

The Milk/Lacto serum mixture after two weeks in the closet

You can clearly see the separation of the curdled milk solids from the refined Lacto-Bacillus serum. This process grows the Lacto in an environment friendly to them and less friendly to the other microbes that were caught in the initial rice-wash water phase.

Separating out the milk solids

This stuff STINKS!!!! Bryan McGrath in his YouTube video, Korean Natural Farming-Lacto Bacillus, mentions that he once tasted this “cheese” and it wasn’t bad. I’m calling Bullshit on that! My chickens gobbled the stuff up but the reek was/is horrid. The serum got mixed 1 to 1 with unsulphured molasses to create a shelf stable liquid that is supposed to be good for a couple of years.

The IMO stuff was heaven compared to that stinking Lacto concoction. The above mixture was combined with water at a rate of 10 to 1 then the solids strained out. 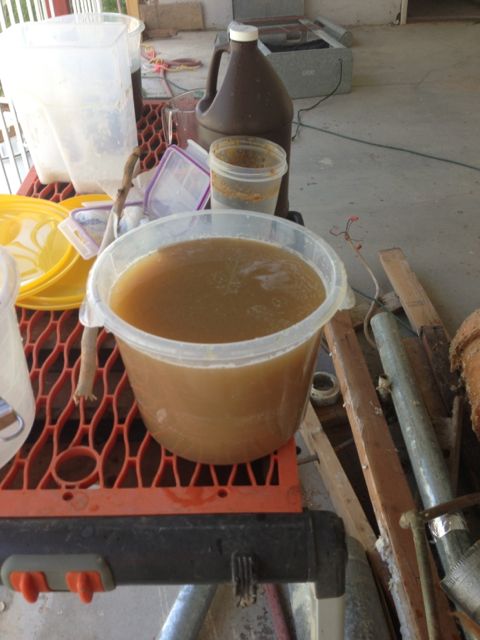 The solids from the IMO fermenting process

Again the chickens gobbled the dregs down, all of this funky stuff the girls are gobbling down should be good for them in that it really is just probiotics for the farm.

The ingredients of my pulsing spray

I applied my first full-bore pulsing spray to my orchard, garden beds, and coop area today. The ingredients were 5 ounces of my recently stabilized IMO/Lacto concoction, 2 ounces pure cold pressed Neem oil with a dash of organic dish soap to emulsify it, and 4 ounces cold processed liquid fish.

All of this was mixed with enough chlorine free water to fill my 2 gallon sprayer and applied to my fruit trees thoroughly. After the trees were soaked to the point of runoff the garden beds and coop areas were sprayed with what was left of the second sprayer full. 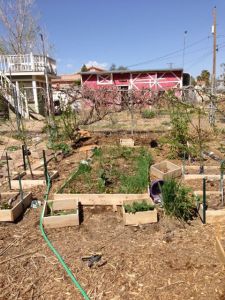 One of the Comfrey plants I thought I had lost 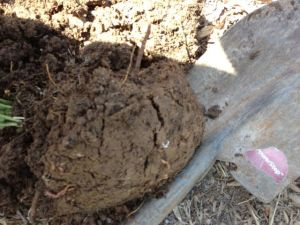 All of the microbes in this mixture are going to fed and energized by the fatty acids in both the Neem oil and Liquid Fish and hit the ground running, breaking down organic material into compounds less smelly and more useful to my plants. Additionally these beneficial microbes should colonize the bark, leaves, and mulch crowding out harmful microbes. I’m looking forward to blogging about the results both positive and negative. Initially I have one negative that I will have corrected before my next application, that little 2 gallon sprayer killed my back bending over to pump it up. There is definitely a 4 gallon back pack sprayer coming to my tool shed soon!

Last week I chronicled my first baby steps into “Natural” farming or maybe more properly “Korean Natural Farming“. I actually like the term my new favorite non-fiction book, “The Holistic Orchard” uses right in its title. Holistic . For me that word summarizes the approach I’m going to use in my orchard/garden/chicken ranch, not only looking at the whole system but investigating the whole world of agriculture practices. The goal is to keep an open mind and be inclusive not exclusive, if after thorough research I come to the conclusion that an application of petro-chemical based pesticide, herbicide or fertilizer is the right choice that option, while not being the preferred option, will be included.

Back to my funky stuff! The fungus/bacteria/yeast culturing project went off successfully. Karen did find my fungus bin but didn’t throw it out (Lorri did you snitch me out?) Your going to be spared pictures of furry, fluffy, multi colored spotted rice only because I forgot to take a picture before I processed the goo.

Rice Wash water after a week of culturing. 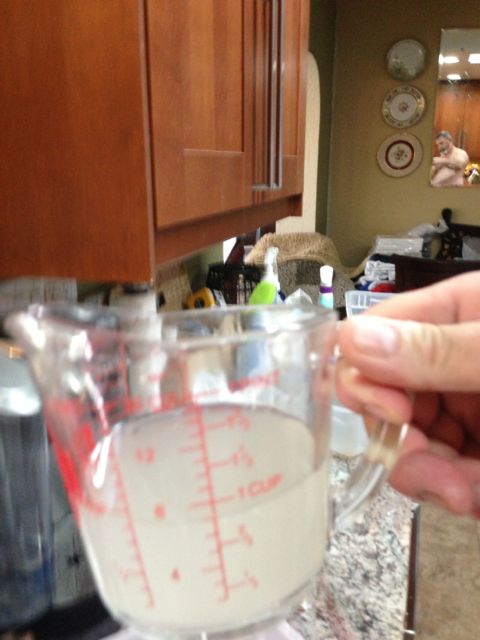 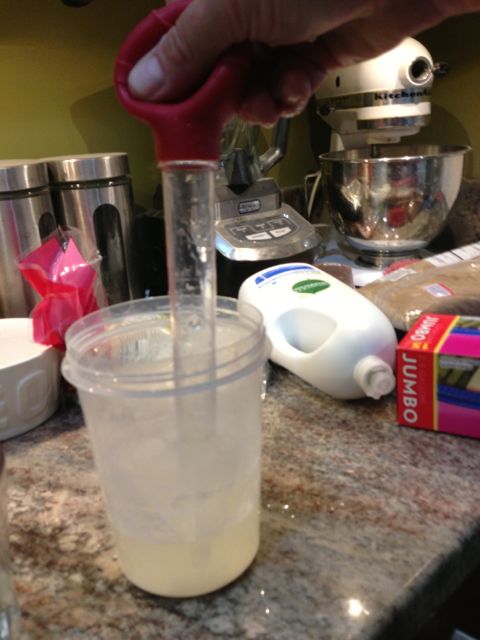 Pulling out 8 ounces of serum with a turkey baster

In 2 weeks time this 80 ounces of milk inoculated with 8 ounces of Lacto-Bacillus serum should curdle and separate leaving me with a crude curd to feed to the chickens and Lacto-Baccilus rich whey to be stabilized and used in the orchard.

The funky rice mixed with brown sugar to make IMO-2

The IMO-2 along with the milk concoction will now go in a dark closet to ferment for a couple of weeks in preparation for stabilizing and then use.